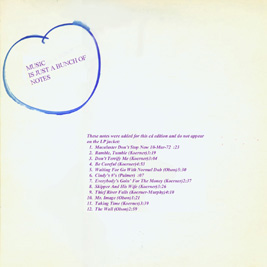 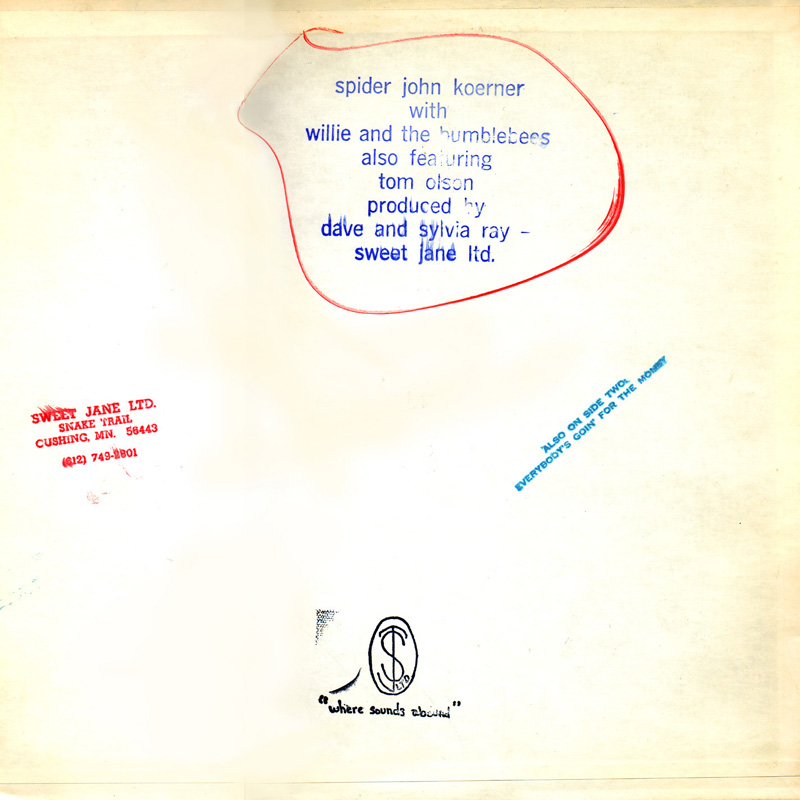 Except for Band One, Side One, which is an excerpt from a live recording of John Koerner, Bonnie Raitt and Dave Ray at Macalaster College made 10-Mar-72, and Band Five, Side One, which was recorded live outside Tom Olson’s house in North Minneapolis, all cuts were done in a room above the Coffeehouse Extempore on Cedar Avenue, Minneapolis between 15-Mar-72 and 6-May-72. The room measured 15′ x 30′ with 11′ ceilings and had plaster walls, skylights and an attached six by four hallway/alcove. The control room was an 8′ x 8′ x 8′ frame construction covered with wallboard, insulated and set in one corner of the main room. Carpeted floors, rugs on the walls, 4′ x 4′ baffles of acoustic insulation and upholstered furniture were used to cut down leakage.

The recording was made using a Crown CX 744 four track (four tracks in one direction), using Scotch 206, ¼”, 10½” reels at 15ips. A Crown SX 722 two track was used as a mixer and as a mastering machine. The four-track has eight inputs (two channels per track). The two track has four inputs (two channels per track). The four track will accept either hi- or lo-impedance mics. When used at high impedance, the gain can be selected by printed circuit board–either hi- or lo-level. We used a transformer on lo-Z mics into the lo-level, hi-Z inputs when we needed attenuation. All the two track inputs are hi-Z, though the gain is selectable as in the four track machine. The mics were Sennheiser 405, Sennheiser 105, Electro-Voice 676, Shure SM 57 and Shure 545.

2.Monitoring was done using the tape recorder playback preamps into a Dyna 120 feeding two Klipsch Cornwall speakers. All monitoring during the sessions was done on Koss PRO 4 headphones.

All the sessions were loose. Most of the material was put together during the sessions. Some of John’s tunes, in substantially different form, were previously released as solo performances on the Elektra label. The sessions were typically three or four hours long, although much time was spent away from the studio on work connected with the recording. There were four sessions with Tom Olson, including the live recording of Normal Dub. There were a total of eight sessions with John and the band (Willie and the Bumblebees). We spent twelve days mixing and one day mastering.

The lacquer master was cut from our two track tape masters on 8-May-72 by Bob Berglund of Sound 80, Minneapolis. We used a Neumann VMS 70 cutter. EMT echo was added to Ramble, Tumble, Everybody’s Goin’ for the Money and Skipper and His Wife. A low-frequency filter reduced the rumble from Normal Dub’s ’55 Dodge. A Burwen Dynamic Noise Filter substantially improved the signal-to-noise ratio. The pressings were stamped at Wakefield Manufacturing, Inc., Phoenix, Arizona and brought to us by Yellow Truck.

We sell them for $2.00 wholesale to stores in bunches. We sell them for $2.50 to everybody else (everyone helps pay everyone’s postage). The deal is bread ahead to us and the records to you by the shipper of our choice. No COD’s.

We want to make a two-hundred per cent profit so we can make some more records. The fat guys advertise mostly nothing while we are busy with mostly something and have here what you want to hear. Some fattys help us, but most of them buy their records for 38¢ apiece. We buy small so we pay more. We demand that our records be sold for not more than $2.50 in the stores, but our demands are rarely met. Where we can keep an eye on things, we enforce our own kind of fair trade agreement. We are legally prevented from price-fixing downwards, so we include this message to you so you can help stamp out creeping inflation by stamping out the pigs who ripped you off for $4.99 for this $2.50 record.

For sure thanks to Bruce Rubenstein, Mike Justin, Steve Raitt, Ron Sjoberg, Doug Erickson, Jerry Meditall, the Little Falls constituency and others way too numberous, etc., for their time advice and equipment.